Once upon a time, CCTV cameras came in one shape: big and boxy. In recent years technology has given us so many more types to choose from. We’ve gone from simple to bewildering as CCTV cameras continue to dominate modern cities, and a CCTV system becomes an ever-more integral part of an organisation’s security and business operation.

The simplest form of camera type remains a simple box camera, to which a lens of the user’s choice is attached at the front and cables to the rear. Mount it somewhere and monitor it. Incidentally, some ‘box’ models have a built-in lens, maybe even a zoom lens, but these are not common.

If the naked camera and lens is expected to suffer damage from dirt, rain, frost, heat or tampering, a protective enclosure called a ‘housing’ is recommended. Basic dust-proof options are simple rectangular or cylindrical boxes with a window for the camera’s view, cable outlets for power and video, and a fixing bracket. These are likely listed as ‘IP54’, meaning the Ingress Protection is officially dust protected and protected against splashing water, but not rain-proof, so often fine inside buildings.

For external use, IP65 is recommended (dust-tight and protected against water jets) as a minimum and add a sunshade to keep glare off the housing’s window. In hot and cold environments ventilating fans/blowers can be specified to reduce camera temperatures and thermostatically-controlled electrical heaters to prevent window misting. 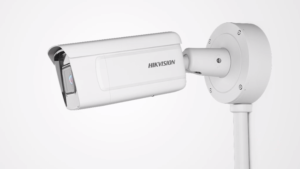 Bullet cameras are named so because of their cylindrical form. Such is the miniaturisation of these technologies that their use is widespread in video intercoms, covert disguises (e.g. clock faces, smoke detectors), head-mounted on traffic wardens, police, and more.

Generally a bullet camera is utilised outside, as it often comes installed within protective casings and head covers that prevent damage from dirt and protect from the lens face being interfered with. They are also considered easy for installation purposes, often simply being screwed on to a mounting bracket.

Domes have become the housing chosen most often for compact camera assemblies, largely because CCTV users consider them more visually appealing than the old ‘white shoebox’ of yesteryear.

Featuring a circular, dome encasing, dome security cameras are used in a variety of settings, with the majority featuring vandal resistant casings as part of crime prevention tactics.

The majority can be quickly surface-mounted on walls/ceilings, recessed into ceiling tiles for a lower profile, or hung as a ‘pendant’ from external corner brackets or masts on a ‘swan neck’. Domes containing a static camera usually have a varifocal lens so that installers can tweak the precise field-of-view.

Some IP (Internet Protocol) CCTV domes go so far as to fit these static cameras with ‘actuated’ innards that can drive the orientation, focusing and focal length by remote control after physical installation, but stop short of being regular pan/tilt domes (see below).

Units with integral LEDs should be deployed with caution – while providing some benefits, they reportedly can cause glare for the camera and attract wildlife.

For many years domes could not spin supplementary lighting, so a swathe of static lamps was necessary at night. Some domes now include powerful LED lamps, either infrared or visible light that spin with the camera. ‘Ball’ PTZ cameras now combine lightweight dome innards in very robust metal ball-shaped cases carried by fast externally integrated pan/tilt motors. Attaching lights to these is so much easier, too.

A dome security camera can cross paths with a variety of other CCTV options, including but not limited to: 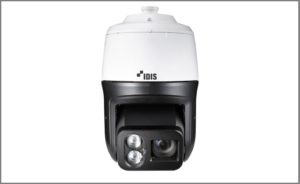 A PTZ camera from IDIS

PTZ stands for pan, tilt, zoom. These cameras are popular for their flexibility, providing a lightweight option that can cover a wide area range. They offer operators the ability to manually control their cameras, or programme them to ensure they receive the most accurate view possible.

Where lightweight equipment will suffice, a PTZ camera is generally considered a popular solution. Indeed, so light are the innards that some claim to spin as fast as 360°/sec. Darkened domes can make the camera’s direction of view difficult to be ascertained by those surveilled, albeit also diminishing its low-light performance.

The camera/zoom lens combinations share much with low-voltage camcorder assemblies, which is why 35:1 zoom is commonplace along with auto-focus. Small and powerful onboard computing power adds telemetry control plus options such as the aforementioned preset-memory function, privacy zones that automatically move to keep user-programmed areas obscured from the video, auxiliary alarm inputs/outputs, wireless communications, and video content analysis including automatic target following.

While an IP camera (or network camera) now provides a modern alternative, analogue CCTV systems still remain widespread – even as manufacturers push their IP solutions as the most effective choice. Many of the cameras described in this article will be available as either analogue or IP options.

The major difference between the two is how footage is transferred between the cameras and recording system. IP cameras allow this footage to be transferred digitally over a network, with each camera having its own IP address in order to communicate back to the recorder.

An analogue or analog camera, on the other hand, will need to send the CCTV footage back via a coaxial cable directly to a Digital Video Recorder (DVR), which will then convert the signals into digital footage. This conversion is undertaken at the camera-end, for IP cameras, meaning the digital signal can be sent via the network, often to a Network Video Recorder (NVR) – though other storage solutions such as server/cloud-based options are becoming increasingly common.

As video quality and network internet speeds have improved, IP cameras are becoming more and more commonplace. While analogue systems are often lower in price and require less bandwidth, they don’t work well in a wireless solution and don’t offer the same kind of tech capabilities that IP solutions can provide. Video analytics, reduced cabling, improved image quality and zoom capabilities, and scalability are all benefits associated with an IP camera.

IP cameras are also ideal for operators looking to utilize a cloud-based surveillance storage option, where footage is sent directly to a third-party server. A cloud-based solution offers the benefits of offsite storage, ease of access to authorized parties, and also includes VSaaS (Video Surveillance as a Service) alternatives to video storage. 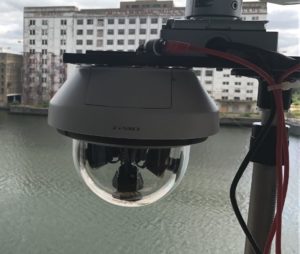 The name pretty much speaks for itself, here. HD Cameras have become more widespread and affordable in recent years, as vendors have been able to integrate high definition capture technology into their surveillance solutions.

Generally, these cameras require higher bandwidth to transfer recorded across to the recording system in operation but offer high-quality video quality that make them compelling for on-premises live monitoring.

In more recent years, 4K and even 8K options are now beginning to come to market, providing operators with ‘super high resolution’ alternatives. These are said to be particularly ideal to high-level security environments, such as transport hubs, stadiums and other open environments at risk of terrorist activity.

The number of camera options we’re subjected to nowadays might seem bewildering and advancing technology will surely make it grow.

And, with the widespread availability of video analytics and deep-learning software that can now be integrated into a surveillance system, the choices are certainly broad. Analytics software now has the ability to provide operators with the benefits of motion detection, thermal measurements, social distancing and face mask detection, facial recognition capabilities, and much more. Network and CCTV surveillance technology continues to evolve at some pace.

Nonetheless, with an outline of the possibilities and a conversation with consultants, integrators, installers, or others involved in the sector, you should be able to narrow down your surveillance camera system choice quickly and efficiently to improve your security system.

Still don’t know which solution is best for you? Contact us and we will help you